Rabeya Sultana Nijhum: The word ‘Weird’ can be define in many ways both positive and negative terms. Mostly we use this word two express or describe something strange, mystical, curious or peculiar. But after knowing about the ‘WEIRD WORKERS’ ..it’s my privilege to represent this word as the admiration of a particular class of unique people. 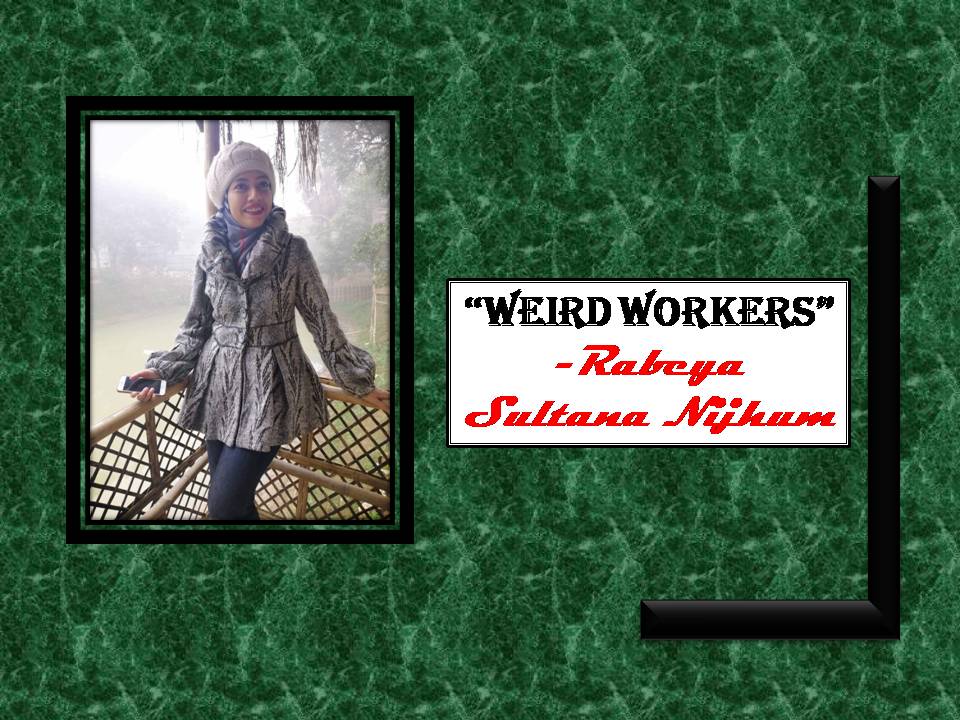 “Weird workers are among those at the forefront in embracing the new political culture that is transcending traditional ‘left – right’ politics. In this new order political outlooks are based less on traditional class issues, such as fiscal policy and welfare provision, and more on ‘lifestyle issues’ that reflects personal concerns and values” —— (CLARK & HOFFAN MARTINOT 1998)
Globalization, advances in information technology and changes in the nature of work are joining together in generating a new type of economy. The most dynamic sectors of this economy- computers, finance, software, telecommunication are ones that are dependent on ‘knowledge workers.
According to the Social Stratification, the society is consisting of three classes; The Upper Class, The Middle Class & The Under Class. The upper class consists of small minority of individuals who have both wealth and power, and are able to transmit their privileges to their children. They work as a professionals, manager and top administrators. The Middle Class or the Intermediate Class covers a broad spectrum of people working in many different occupations, from employees in the service industry to school teachers to medical professionals they are the diversity of occupations, class and status situations, and life chances that characterize its members. One of the fastest growing segments of the middle class is comprised of people who work in the ‘infotech’ sector known as ‘Weird Workers’.
These so -called Weird Workers are employed in the board spectrum of positions, as webpage designers, e-commerce workers, online marketers and advertisers, data analyst, system analyst, software developers, graphic designers and financial consultants. Despite this diversity of occupations, weird workers are united by several commonalities. They tend to spend most of their time behind computers, working in no hierarchical settings. Sometimes rather than performing respective tasks, some weird workers engage in dynamic problem-solving activities. The number of weird workers is hard to estimate with any precision, but some have placed it as high as a third of workforce in EU countries, and United States. By all means the knowledge economy is still in its emergent stage; the population of weird workers seems sure to grow.
I am honored and proud to be surrounded by not many but few friends who are working as a Knowledge Worker and from now on I would loved to call them ‘Weird Workers’ as they are playing one of the important white collar role in our economy.