Today I am going tell you about a device that can save you from fire! People in this country are not so much familiar with this device that is why I decided to spread awareness among all by discussing about this device and its working principle. The name of this device is Smoke Detector.

Photoelectric Smoke Detectors:
Whenever we cross the beam of light, we block it. The photo detector senses the lack of light and triggers a bell. We can’t imagine that how this same type of sensor could act as a smoke detector. If it ever got smoky enough in the store to block the light beam sufficiently, the bell would go off. 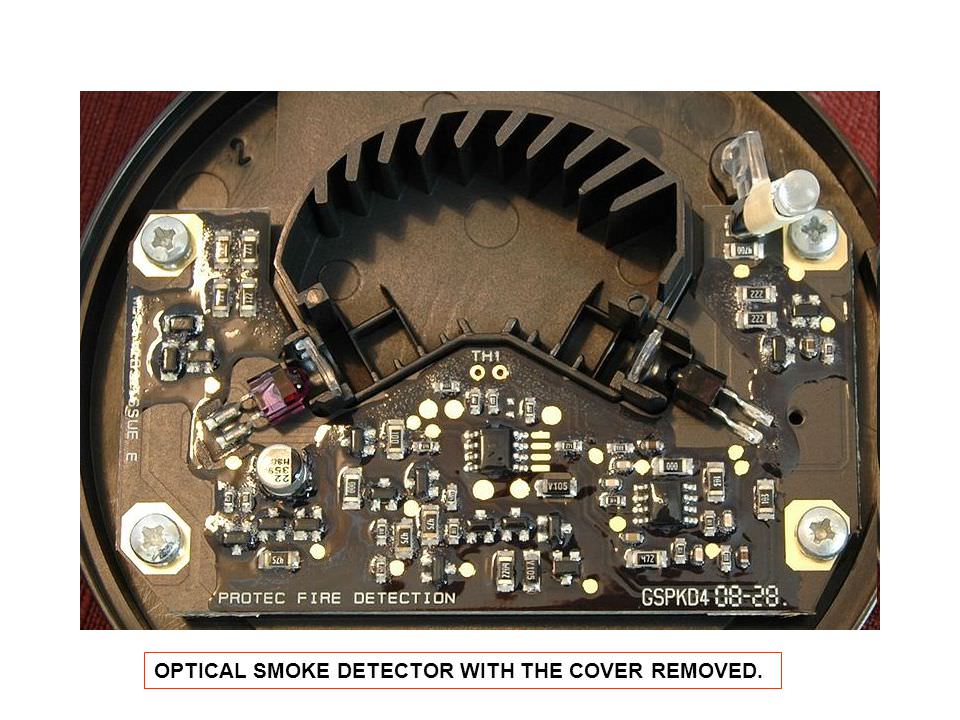 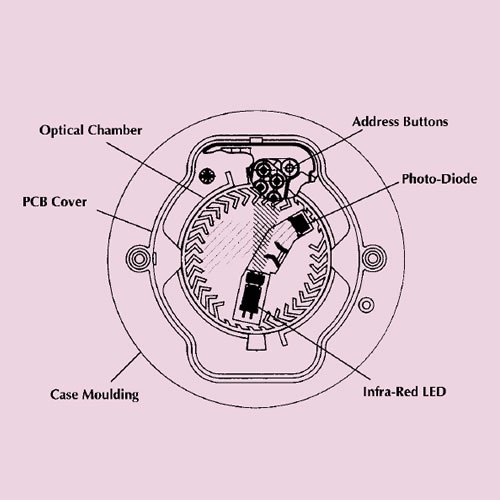 An optical detector is simply a light sensor. When it is used as a smoke detector, it includes a light source, a lens to collimate the light into a beam and a photodiode or other photoelectric sensor at an angle to the beam as a light detector. Photoelectric smoke detectors therefore use light in a different way. Inside the smoke detector there is a light and a sensor, but they are positioned at 90-degree angles to one another. In the normal case, the light from the light source on the left shoots straight across and misses the sensor. When smoke enters the chamber, the smoke particles scatter the light and some amount of light hits the sensor.

When the beam becomes less visible to the eye of the sensor, it sends an alarm signal to the fire alarm control panel. The sensor then sets off the horn in the smoke detector.

Ionization Smoke Detectors:
Ionization smoke detectors use an ionization chamber and a source of ionizing radiation to detect smoke. This type of smoke detector is better at detecting the smaller amounts of smoke produced by flaming fires. 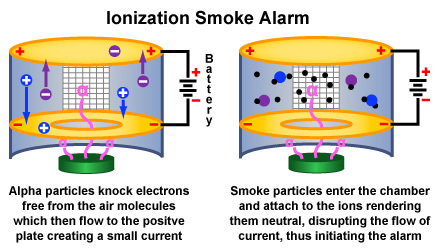 Inside an ionization detector there is a small amount of americium-241, a radioactive element which is a good source of alpha particles. Alpha radiation, as opposed to beta and gamma, is used for two additional reasons: Alpha particles have high ionization, so sufficient air particles will be ionized for the current to exist, and they have low penetrative power, meaning they will be stopped by the plastic of the smoke detector and/or the air.

An ionization type smoke detector can detect particles of smoke that are too small to be visible. The typical ICSD radiation source emits alpha particles that strip electrons from the air molecules, creating positive oxygen and nitrogen ions. In the process, the electrons attach themselves to other air molecules, forming negative oxygen and nitrogen ions. Two oppositely charged electrodes within the sensing chamber attract the positive and negative ions, setting up a small flow of current in the air space between the electrodes.

When smoke particles enter the chamber, they attract some of the ions, disrupting the current flow. A similar reference chamber is constructed so that no smoke particles can enter. The smoke detector constantly compares the current flow in the sensing chamber to the flow in the reference chamber; if a significant difference develops, an alarm is triggered. This type of smoke detector is quicker at sensing flaming fires that produce little smoke.

Smoke detectors are one of those amazing inventions that, because of mass production, cost practically nothing. And while they cost very little, smoke detectors save thousands of lives each year. In fact, it is recommended that every home have one smoke detector per floor. In 1992 the readers of R&D Magazine selected home smoke alarms as one of the “30 Products that Changed Our Lives.” Therefore, we should seriously think about making this device a part of our everyday life for our safety.